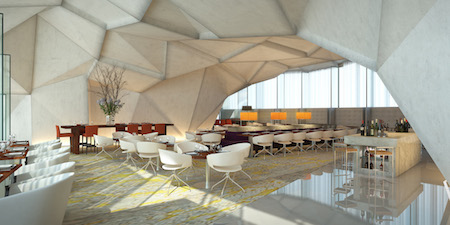 When we arrived in Dublin we stayed in this swanky futuristic hotel called the Marker. We found a Hotels.com coupon that made it affordable enough for us to book one night there. We didn’t brave driving on the other side of the road, but if you wanted to you can read more about that here.

We were greeted by a wonderful host, Ng. She was a finely dressed Asian woman with a thick Irish accent. It was unexpected at first, but truly a sign of the changing times in Ireland. Along with the offices for Google and Yahoo, these were the signs of Dublin becoming a true world-class city.

It had an awesome swimming pool that was dimly lit with a ceiling made out of polygon-shapes that made it look like you were swimming in an underground cave on an alien world.

The most important meal came the next morning: breakfast! We opted for the buffet that morning, and we were pleasantly surprised by all the local Irish offerings: blood pudding!


Sadly they did not have potato bread. My Irish family used to make me potato bread on special occasions and it was absolutely tasty. I asked one of the hotel servers and they said that potato bread, or potato farls, or potato scones, or tatty scones, are a Northern Ireland/Scotland dish.

Sadly my potato bread will have to wait.

For lunch me and my girlfriend headed out to Dublin’s ‘main street’, O’Connell Street. It’s the closest thing Dublin has to a tourist trap, with lots of expensive shops and restaurants. I, of course, wanted to try some authentic high-end Dublin cuisine.

I guess it’s Atlantic salmon. But regardless, the very sight of this sushi restaurant got my girlfriend’s stomach grumbling, and there was no contest to be had. We had sushi for lunch.

What’s weird and a little unsettling is how closely it tasted exactly like any sushi back in Vancouver…which is part of the Pacific Rim and has a huge Asian influence. I guess our west coast sushi isn’t all that special after all.